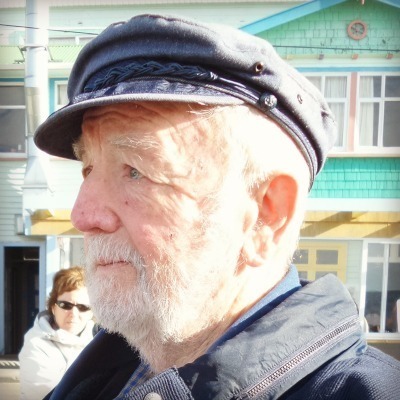 The recording is in four parts. The text is a loose summary, not a transcript.

0:00 My grandfather D.J. Duggan. Little connection with him because he died young (52). His name was legendary in the family. He was quite a people mover.

4:00 Tarnagulla was an important part of my upbringing. Activities such as birdnesting. We'd take pot shots.

7:45 Who was Molly? The remains of D.J. Duggan's shop in the main street of Tarnagulla. Also the lolly shop.

9:10 D.J. Duggan was in Melbourne in later life. He died in Melbourne. His widow Maisie died at 99. Account of her digging in the garden. She stayed with Auntie Win, the daughter of D.J. Duggan.

13:55 Meeting Auntie May on the tram. She was quite a lady. She lost her memory in later life.

0:00 Creswick: my parents buried there. Tom Cushing was the mayor of Creswick and because he was a widower my mother was the mayoress. She painted. She also recited poetry and played the violin. She supported Dad.

2:15 Dad took up law after the war and took up the articled clerk's course. I went to school proud and said 'My father was the sheriff'.

3:50 How Mum met Dad. We lived in a house in the middle of Creswick. Mum did wonders making ends meet.

6:45 I remember the Pascoe's, the undertakers. In Ballarat we moved into a house which had been a big mansion, with a ballroom. We all got diphtheria at the same time. Toss was the family dog. We used to toast the bread in front of the open fire. Mum fed us well.

10:05 Dad was a great gardener and a mathematician.

11:55 He did many brave things during World War I. They stole horses of the Poms. Dad led the raid. Dan and I used to call ourselves the son of a horse thief.

15:50 He had a photographic mind. That made him an impeccable judge. He could tell an Irish prince when he saw one.

16:50 Where did he stand politically? Labor all the way.

17:30 After being Clerk of the Court in Ballarat, he went to Bendigo, then he became the police magistrate of Ballarat. The family moved to Ballarat.

19:00 Bendigo I regard as my home town. Our house was called Raheen, which was also the name of Archbishop Mannix's residence. He held Mannix in high regard.

20:30 He was very firm in his views. There were only three things a girl could do. The girls of the family became nurses.

22:00 Genevieve was the brightest. Dan worshipped the ground Ken walked on.

23:05 We used to go around the towns and put on shows. I'd do a lot of clowning. I'd got thrown out of the school choir.

24:45 How many in Dad's family? Poor state of health services.

26:52 Auntie Win was in love with a soldier who was killed in the war and so she never married. She had a great sense of humour.

26:25 She didn't talk about the soldier she loved because it was a very deep wound. There was a shortage of men.

27:50 Dad's elder brother Michael John, I stayed with him sometimes. He was married to Hermini. The family was very much a family.

26:45 Sense of community? Yes. Danny decided to become a patrol officer in Papua New Guinea. Uncle John wrote him a long letter stating the reasons why he should not leave the bank and go to PNG. A cadetship in the bank was a good thing. You automatically went through to become manager.

30:20 Auntie May said my 21st birthday was coming up and what would I like? I was very dismissive, I didn't want gifts.

31:55 Diabetes was rife in the Cushing family. One of them died on the train between Melbourne and Bendigo.

32:40 Mum's family - Molly. The youngest. She'd had a fall and was very spoilt. She said she'd never be marrying so her father left most of his dough to her. Then she promptly married Jack Charleson. Very strong willed. She was great on the stock exchange. Made a fortune. They had no kids but Jack was great with kids and dogs.

34:30 He split up with Molly, in later years. He was a bit of a Romeo. He had girl friends. He was tall, like an English squire. A great sense of humour.

35:25 Everybody smoked. I was shocked when I found out that Mum smoked. Auntie Hilda smoked as well, but she went to the races.

37:30 The others in Mum's family. We kept more in touch with Dad's family. One lovely character was John Michael Duggan. The most kindly mellow man in the world. But beware the quiet man. He decked the bank manager. He was demoted. Then the union took it up and there was hell to pay. Not only was John reinstated, but he was promoted.

40:15 He lived in Albert Park in Melbourne. Then he retired to a retirement home in the vicinity. I used to pop in and see him. He died at 105 a few years ago. He had a lovely wife but no children. She predeceased him by about seven years. He was, to use the Irish term, a darlin' man.

0:00 There was a lot of bullying. It was a very tough school, Marist Brothers Bendigo. There were two characters who used to bully me. Goggles Keogh at the pool, I took him out to the deep water to drown him. Goggles and I became good friends after that. But not Brodie. He claimed later that he'd been a member of a secret organisation during the war.

4:50 Teacher training college. It was a time of drought. The hills crawled with rabbits.

6:35 Mum was a hell of a cook. Dad got the game and she'd cook it. Dad was a great provider. When he went up to Echuca he'd come home with a box of Murray crays. On occasion he brought home a Murray Cod. Years later I went on a cruise on the Murray.

10:00 Mum as a cook. She did beef olives. That had disastrous side effects. On my honeymoon. I had pipes coming out of me. Danny laughed and said I looked like the arse end of a television set.

11:30 The first three of us were two years apart... Mum was a very lovely and holy person. I wish I'd been a better son. She played violin. She was a good business manager because she'd been a milliner. She made the clothes for the girls.

14:30 When I married Mary, it wasn't without its moments. Danny came down from PNG to be my best man and he cobbered up with the bridesmaids.

16:05 Dad didn't like Auntie Mollie but she was very close to Mum, her sister. We were going away on a holiday and Auntie Mollie decided to come too.

16:55 When I was very young we went to St Kilda for holidays and stayed at the Bleak House Hotel, over the road from the beach. Somebody had caught a shark.

17:40 Sometimes I'd be down in Melbourne with Auntie Win. I used to go up to local baths.

19:15 I stayed with Auntie Alice. Her two boys. Two girls. Dorothy and Mary Brennan. Teddy was being put through Xavier by Auntie May. I felt embarrassed because I really was a country kid. He put me down once too often. So I dropped him. He raced into his mother. I haven't seen him since but he's probably grown up into a nice young man.

21:30 Danny was eight years younger. I taught him to throw a boomerang. Danny got into my stamps. I wanted to kill him.

23:30 I had a healthy disregard for my sisters at the time. When Mum was pregnant with Catherine Dad told me and I said 'turn it up Dad'.

0:00 We used to ride our bikes. We used to lower ourselves down into mine shafts. We lit a fire at one stage.

1:10 I remember the flora and fauna. Goannas, blue tongued lizards. Not too many snakes. In later years, I used to chase snakes.

7:15 Soldiers who came home were an inspiration I wanted to join the air force.

8:10 I'd been in the Air League. I was an acting sergeant. The war finished and we couldn't get in. The end of the war left me very disorientated. But I would have got myself killed.

13:30 As a student teacher I went to Maldon for a year. They sent some of us out untrained because of the shortage. I went to Woodburn Creek outside Meredith, between Ballarat and Bendigo.